The dip was pinned to an Elon Musk tweet that implied his “breakup” with Bitcoin.

Although Elon has not publicly declared his BTC stash, the community closely keeps tabs on his social media comments. He’s the Chairman of Tesla and a billionaire with an interest in technology.

The post is a few days after Tesla back-tracked on their commitment to accept BTC as payment, citing environmental concerns.

Nonetheless, Tesla won’t sell any of their BTC received as payment or liquidate their $1.5 billion investment in the cryptocurrency.

The Reserve Bank of India reverse their Notice on Cryptocurrency Trading

While Bitcoin contracted, the Reserve Bank of India—the primary regulator of the banking scene of the Asian economic powerhouse and one of the most populous countries in the world, is rescinding their ban on cryptocurrency trading.

In a recent directive, the central bank said their notice, warning, and barring banks from serving cryptocurrency traders and businesses was invalid in line with the supreme court ruling.

RBI in simple sense tells all the banks that you cannot deny the services to crypto community.

What an amazing day for all of us as a family after all the mental agony we all have gone through.

MOMENT OF PRIDE AND JOY.

Two of India’s largest banks, State Bank of India (SBI) and HDFC Bank, are now reaching out to clients whose accounts had been banned for trading cryptocurrencies.

Days after saying it would accept DOGE as ticket payment, Spaceship—after striking a deal with SpaceX–has deployed what would be the first Ethereum node to the International Space Station (ISS).

Nexus Inc will install the node. 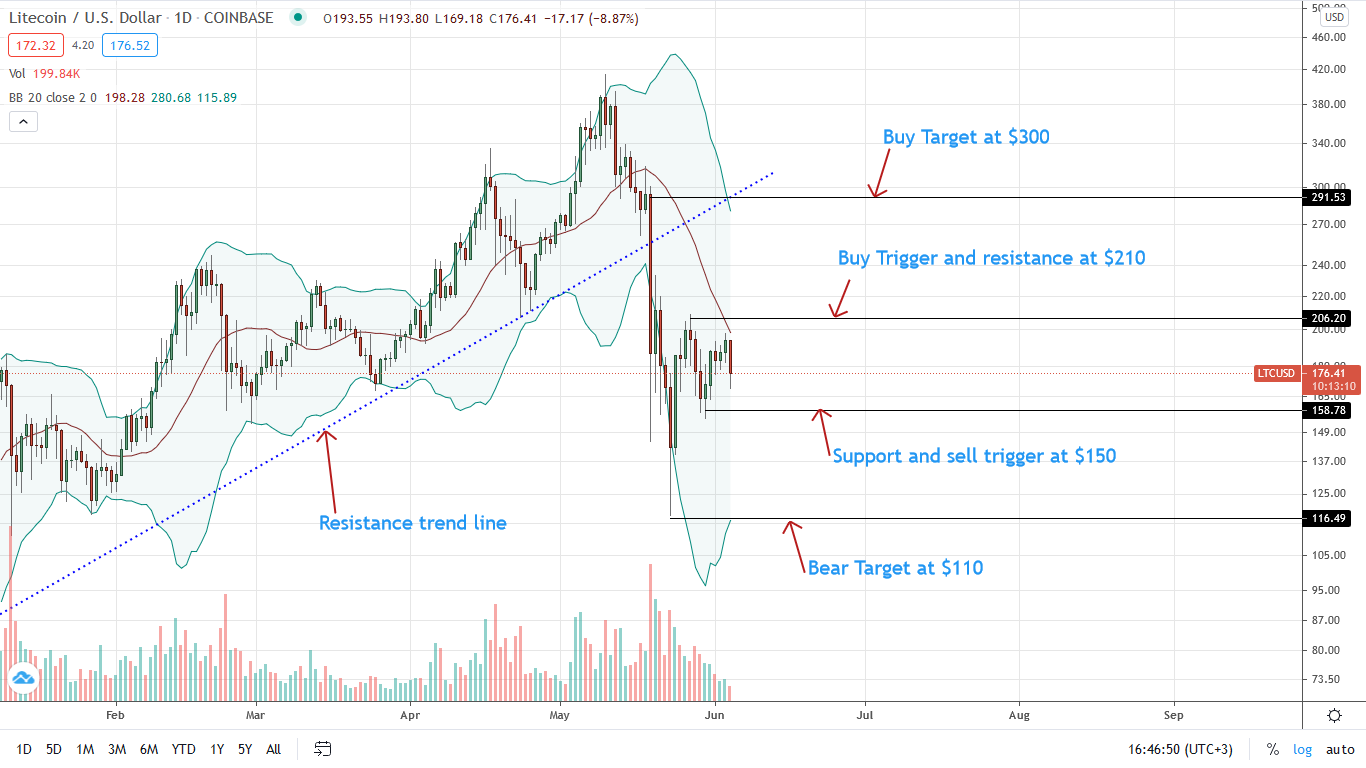 The coin is down five percent against the USD on the last trading day and struggling versus ETH and BTC on the same period.

Meanwhile, trading volumes are within range, down four percent to $4.3 billion.

Technically, the LTC/USD price is under pressure and trading within a bear breakout pattern. Moreover, prices are trending below the middle BB, skewing favorably for bears.

Notably, despite confidence in late May, LTC/USD prices are still in range inside May 19 bear bar. Besides, trading volumes are comparatively low.

From an Effort-versus-Results analysis, therefore, every pullback could be an unloading opportunity for aggressive bears.

Accordingly, in the immediate term, gains above $210 may see LTC prices expand towards $300 in a retest of May 19 highs and the previous support now resistance trend line.

On the flip side, confirmation of June 4 losses may force LTC/USD towards $150 and later $110 in a bear continuation pattern of May 19 dips.

Disclosure: Opinions Expressed Are Not Investment Advice. Do Your Research.