Litecoin Flatlines as El Salvador Approves of Bitcoin, Will Crypto Crash because of China?

For one, traders still don’t need to forget that crypto prices favor bears.

Sellers are in the driving seat even after the reversals of June 9. If yesterday’s price action guides, the influence of Bitcoin shouldn’t be understated.

For now, clear support is at around $30k. Unless there is a sharp spike in activity, thrusting Bitcoin above $35k to over $42k, wiping out gains of May 19, bulls stand a chance.

Technically, provided BTC/USD prices are oscillating inside H2 May 2021, the odds of price dumps remain high.

This is despite news of El Salvador and President Nayib Bukele doing what Nakamoto wouldn’t have expected. Bitcoin is now legal tender in South America’s smallest country.

It's official. The El Salvador law has been passed. #Bitcoin is a legal tender in the country. Let's just take a moment to appreciate the moment 🙏🏻 pic.twitter.com/9n7MxqLgjp

The president reckons that if BTC is adopted, it will help jump-start the economy, taming economic downturns spawned by the coronavirus pandemic.

Besides, since 25 percent of the country’s GDP is from remittance, over two million El Salvadorans would have a cheaper way of remitting funds.

There are more perks for crypto businesses and entrepreneurs.

For instance, a 3 BTC investment gets one a permanent residency.

In addition, Crypto investors are relieved from tax breaks. There will be no capital gains tax on BTC as legal tender.

In a notice served on June 9, the goal—in mirror likeness of Inner Mongolia’s directives—is part of making China compliant with global efforts to make the world green.

FYI the county being discussed is in red with broader Xinjiang area in orange. I’d have to confirm but to my knowledge there’s nothing particularly special about this country wrt bitcoin mining. https://t.co/nUDDgOmsQ6 pic.twitter.com/2WvoS4q9zB

That means cutting carbon emissions and protecting the environment.

Even with overflowing evidence showing Bitcoin mining is green and miners—by and large—environmentally conscious, critics maintain that BTC’s energy-inefficiency makes it a wasteful and degrading remittance technology.

While this happened, leading social media sites in China have blocked leading cryptocurrency exchanges like Binance, Huobi, and OKEx. 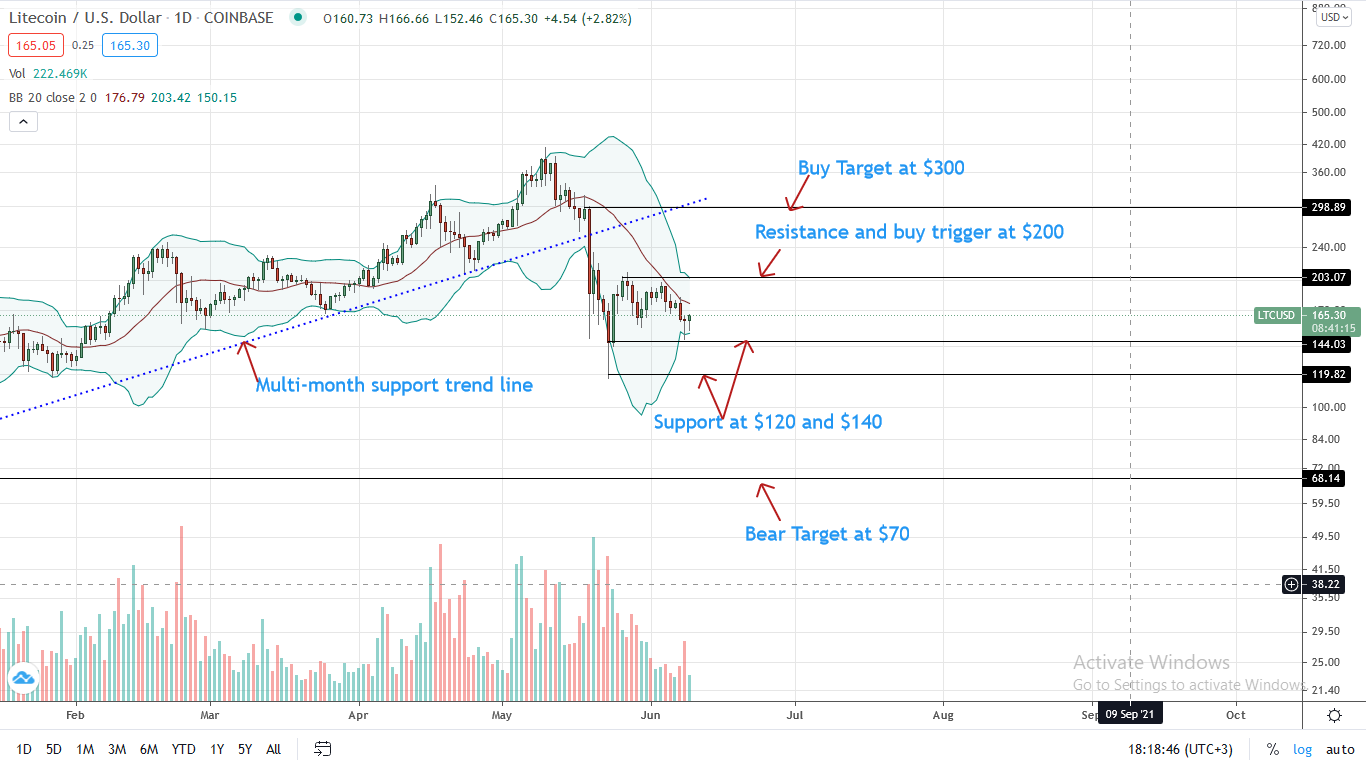 The positive correlation between Bitcoin and Litecoin means that the latter will also crash if the former craters.

From the daily chart, LTC/USD is within a bear breakout pattern.

Notably, LTC prices are under pressure. There have been weak attempts to reverse losses of May 19 without success, judging from the candlestick arrangement.

On the reverse side, the middle BB and $200 are the immediate buy trigger for determined Litecoin bulls.

As such, this means two things:

If LTC/USD bulls clear $200, aggressive traders may find loading opportunities on pullbacks as they aim for May 19 highs of $300.

Disclosure: Opinions Expressed Are Not Investment Advice. Do Your Research.