The cryptocurrency market is heavily reliant on the performance of Bitcoin.

Reading from price charts, sellers are in control, dashing hopes of any recovery in the days ahead.

Bitcoin is in Tatters, a Contrarian Pattern in Play?

Crypto sentiment trackers reveal “extreme fear” among traders. It is especially after Bitcoin fell below $30k on July 20 as bears forced the coin back to around May 2021 lows.

The dip is after days of sideways tepid movements below $36k—the intermediate resistance level—that optimistic traders hoped to overcome earlier this month.

It is usually in this deep-seated fear that often time crypto prices tend to surprise the markets. The zone between $20k and $30k is critical for chartists.

If a contrarian prints and Bitcoin finds support. In that case, the retest will be completed, opening doors for possibly another road up to $64k in a buy trend continuation.

These higher highs might print over months, just like the period before the halving in 2019 when prices recovered from around $3.2k to top $14k.

This fact is what keeps HODLers going.

Furthermore, with support from macroeconomic factors, the future of Bitcoin—and crypto—looks bright.

The FED and most central banks say they won’t slow down on monetary policy support and unwind bond purchase programs.

Some might have gone slow on weekly repurchases–like the Bank of Canada (BoC), true. Still, the program continues regardless of macroeconomic metrics like the labor market’s strength and retail sales pointing to ground revival. If anything, inflation is rising.

While this might be the case, Bitcoin holders might have more reasons to double-down, buy the dips as they shield themselves from future erosion.

It was the anticipation of this year’s inflation and expectation of loose monetary policy that Bitcoin and most store-of-value assets rallied in tandem. Inflation is the primary reason why the Winklevoss Twins predicted Bitcoin to reach $500k in the near future.

Approval of a Bitcoin ETF as a Bullish Trigger

Inflation is one thing, and the approval of a Bitcoin ETF is another factor.

Brazil’s regulators have approved Ethereum and Bitcoin ETFs. Many complain the U.S. is lagging.

However, Osprey Funds CEO Greg King says the SEC might approve a Bitcoin ETF next year.

He explains that the SEC under Gary Gensler has a lot on their plate, and approval of a Bitcoin ETF might be pushed to next year.

Presently, there is an ongoing court case between the regulator and Ripple. The Judge may rule in favor of the blockchain company. 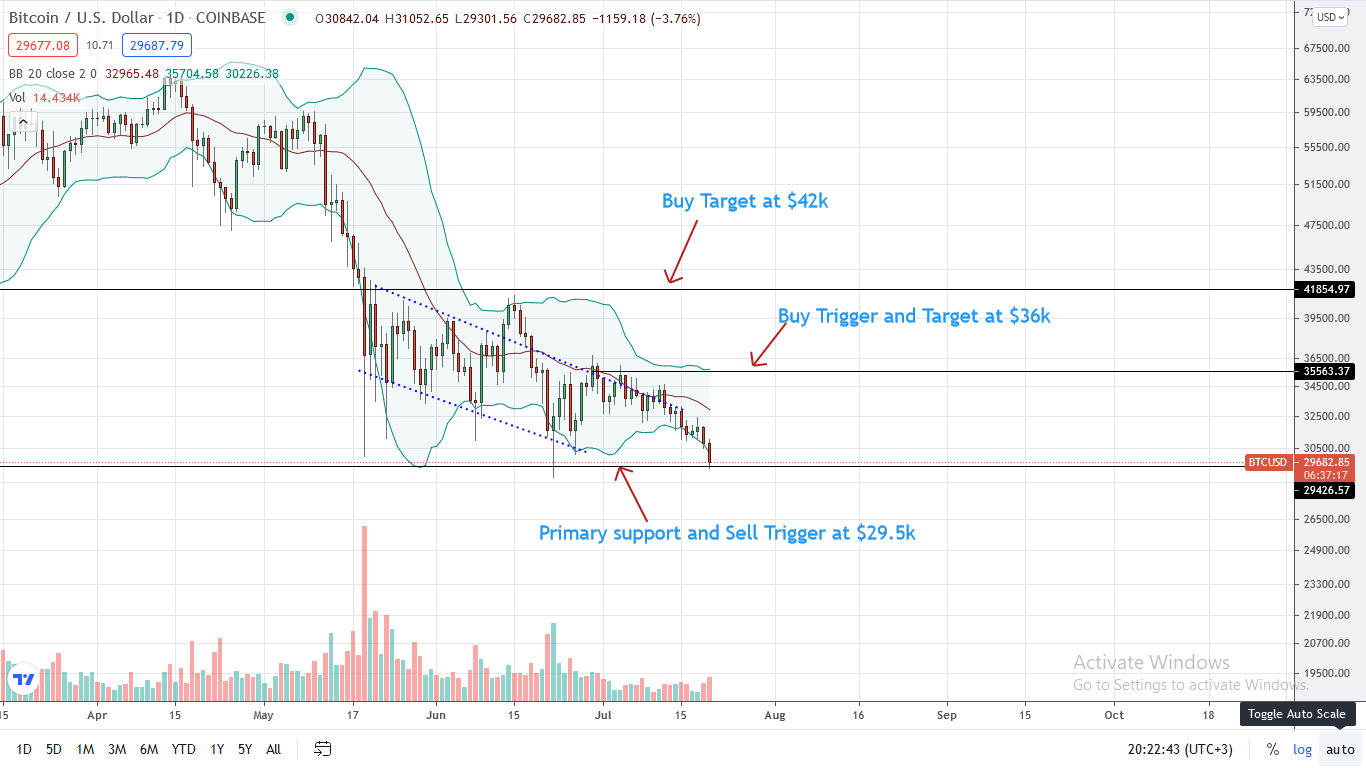 The BTC/USD price is in a downtrend, and sellers are in control.

The coin is down 10 percent in the last trading week and precariously hanging above the triple-bottoms of around $29.5k.

Technically, candlestick arrangements favor BTC bears as prices move inside a descending channel and below the middle BB.

In the immediate term, a close below $29.5k would catalyze a sell-off towards $20k in a retest.

On the flip side, rejection of lower lows with high volumes and a double bar bullish reversal pattern may attract buyers targeting $36k and $40k in the medium term.