Bitcoin Cash adds 5%, is this the End of Bitcoin Bear Run?

If anything, traders are a tad bit cautious of Bitcoin’s short-term trend. There might be hints of strength here and there.

However, if the resurgence of the NY session of June 22 is to launch, dashing concerns, BTC/USD price action must bounce back strongly from June 2021 pits.

Reading from the daily chart, the BTC/USD is still dangling—somehow.

From a top-down approach, the path of least resistance is southwards. The situation is made worse by the Death Cross in the daily chart and free-falling BTC prices in the weekly chart.

Even so, there is hope for Bitcoin. For instance, the reversal from below $30k was with markedly high trading volumes.

Bitcoin is Law; Influencers Bought the BTC Dip below $30k

There was news that Tether Limited issued more stablecoins as traders bought the dips.

Among those who took advantage of falling prices is Cathie Wood of Ark Invest, who bought one million shares of Grayscale’s Bitcoin Trust, as CNBC reports.

El Salvador’s president, Nayib Bukele, describes Bitcoin as “bulletproof” beneficial to users across the globe. Moreover, during the interview, the president said BTC is the law and won’t make any Altcoin legal tender.

"#Bitcoin looks bulletproof. It's going to work not only for us, but for humanity. It's a leap forward for humanity." – President of El Salvador, @nayibbukele 🇸🇻 pic.twitter.com/qA2Y5QnaWH

Meanwhile, the Bank of Israel is trialing Ethereum for its recently launched digital shekel as per a Bloomberg report.

A month earlier in May, the central bank concluded that the digital shekel would positively impact the economy and protect market transactors. 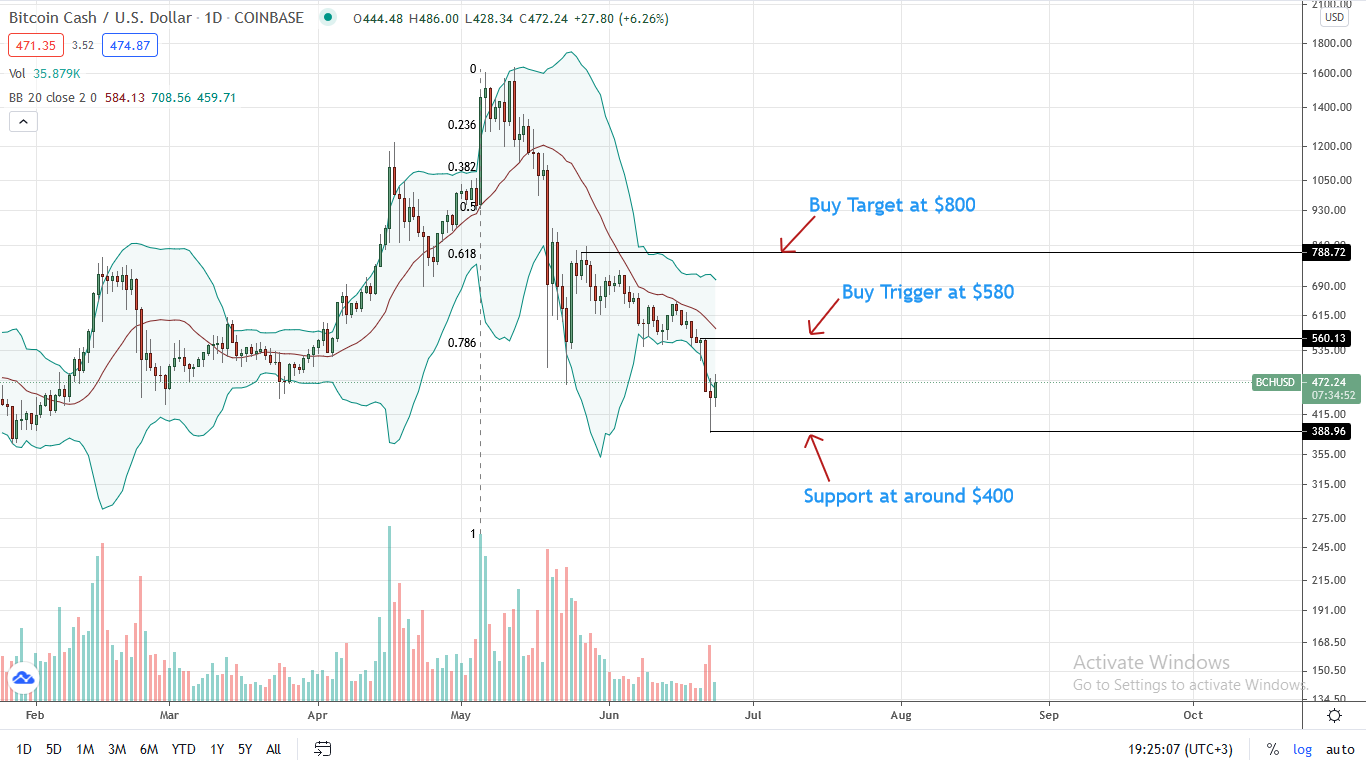 The BCH price is down over 80 percent from H1 2021 peaks, as Fibonacci retracement tool of the last six months reveals. On the last day, BCH is up five percent versus the USD.

There were signals of reversal but still, the downtrend is firm, and sellers are firmly in charge.

Still, reading from the daily chart, the undervaluation of June 22 may convince traders to load on dips targeting Jun 21 highs of around $580 and later $800.

However, there must be a strong, high-volume reversal of June 21 losses in a three-bar bullish reversal pattern for this to be valid.

Already, the undervaluation is being corrected as BCH/USD printed higher on June 23. Besides, the long lower wick signal demand in lower time frames.

Since BCH/USD is down over 80 percent from peaks, the odds of a correction remain higher. Accordingly, buyers, at spot rates, have a chance.

Nonetheless, unexpected losses below Jun 22 may see BCH slide below $400 in a bear trend reversal pattern reflecting losses of May 2021.